What does a phonebug look like and how can i find out if im bugged? 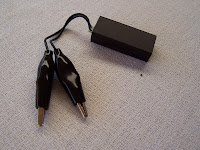 Here we have displayed a phone bug, from this photo you couldn't identify exactly what frequency this device operates though a list below will give you a brief understanding on different types of phone bugs that are available on the web:

International Intelligence Agency, based in sydney http://www.spy4u.com.au/ was established to educate business's to minimize and mitigate the risks associated with Espionage. The following discussion are to educate that espionage is a real threat in today's society and when people dealing with a tscm survey/security sweep or a bug detection service, you should really leave it to the professionals as it is a highly technical field and more than likely it wont be detected with a similar tscm device as exampled below: 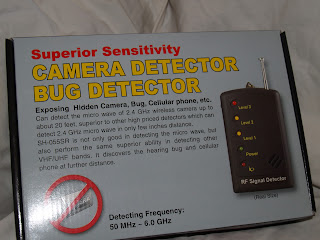 There are many types of phone bugs available on the market and each type of device will have a security measure to help locate them:

Low end fm transmitting phone bugs: These types of devices are easily found by a professional, due to the high signal strength and analog signal that transmits from the device, these type of devices generally are more common operating in the fm frequencies (88mghz), and slightly above the FM band around the  to 110-120mghz. Not to say that you cant have another fm phone bug outside the mentioned frequencies mentioned above.

Lets step up a gear:

Generally UHF devices will be sold in spy shops, used by some private investigators or enthusiasts. These devices transmit in the range which is on a much higher frequency and generally in most cases have a smaller signal strength then the fm devices. They have their own receiver to receive the transmission. To detect uhf phone bugs it requires the tscm operative to at least has a scanner of some description.

Then we have the hidden ones or best known as covert telephone bugs which are with-in a modapt device where your phone line clicks into.

Other sneaky types which are a little more difficult to detect are digital voice recorders with some modifications, it stores the information in its memory or memory card instead of transmitting. A physical inspection or a time domain reflectometre would be needed to locate such a device or possibly even a non linear junction detector pending on where the install was carried out.

* Inside your house pass the telstra connection point
* Underneath your house or roof by splitting or cutting the cable.

It can even be place down the road past your pit if you know how to trace a phone line. So yes, you can tap someones phone line without gaining access to there house, it can be done down the road!

Physical searches are important to all tscm operatives in locating devices, if you cant afford to hire a professional don't waste your money on a cheap detector, research devices andconduct a thourough physical search.
Posted by Security sweeps and preventative measures at 1:00 AM No comments: